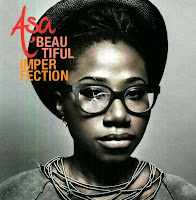 I'm a big fan of Asa and I love both her albums. I've listened to both albums over and over again. She's such a great lyricist and all the words in her song make sense. She talks about life as she sees it - whether it is relationships, culture, family problems, politics, war and so on.

One of my favourite songs on her second album (Beautiful Imperfection) is Bimpe. I love the simplicity of the music and the beats, but above all, the song tells a story. It is the story of an unnamed  character, and Bimpe is her boyfriend (or husband)'s younger sister. But they do not get on at all. The narrator accuses Bimpe of overstepping her boundaries, of disrespect, saying bad things about her and of sticking her nose into her private affairs.

Now in Yoruba culture, a wife is supposed to respect all her husband's family members, even if they are younger than her. Perhaps this Bimpe takes advantage of that culture and is rude and disrespectful of her brother's wife because she knows that the wife cannot openly confront her. So in the song, the narrator is trying to send Bimpe a warning to back off and stop disturbing her relationship with her brother.

I tried to imagine myself in that situation.Thankfully, I have a great relationship with my hubby's sisters who are lovely people. But we hear so many horror stories of wife and in-law battles, or the political games that both sides try to play to keep the peace even if they don't get on well. I have friends who are happily married, apart from the fact that they don't like members of their husband's family. And I have friends who don't particularly like the lady that their brother is dating or married to.

It also seems to be a woman thing, for some reason. I don't hear of wives having battles with their father-in-law or brother-in-law. It's usually the husband's female relatives that are hostile to his wife. I wonder why. Are we females so selfish and possessive that we feel we have to protect our "territory"? Do we see the new woman in a son or brother's life as a threat to our own position? Is there no room in a man's life for other women apart from his immediate family? Questions, questions.....

Anyway, back to Asa's song about Bimpe. Someone needs to tell her to chill and back off - that's what the narrator is saying. It almost sounds like "Your brother loves me, deal with it." I love the way the narrator even calls Bimpe out on some of her own issues - Bimpe is unmarried but she has a child out of wedlock. Bimpe has no manners, but she is looking for a husband to marry. Bimpe, fix your issues and stop minding other people's business!

My other favourite song on the album is "Ore", that's another very interesting story. We'll save that for another day....

Did I tell you I looooooooooooove Asa? Here's a photo of me posing like Asa. The photographer knew I was a huge fan, so he handed me the guitar to pose with. I wish I could actually play though! 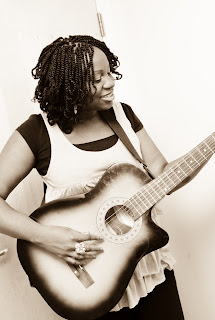 Hi there! Welcome to Favoured Girl's blog. Please feel free to read and leave a comment. If you want to get in touch, email me: favouredgirl @ gmail dot com

Excerpt of "Nothing Comes Close"